Ruby Wax has become one of the best known and popular faces on television in recent years with her brash style been described as refreshing, charming, endearing and very funny.

She began her acting career at The Crucible in Sheffield, arriving fresh from The Royal Scottish Academy of Music and Drama. She soon moved on to the Royal Shakespeare Company where she played featured roles in many plays including The Tempest, Wild Oats and Love’s Labour’s Lost.

Whilst at Stratford Ruby started writing and performing her own shows, enlisting the help of other RSC performers including Zoe Wannamaker, Alan Rickman, Jonathan Pryce and David Suchet. “The Johnson Wax Floorshow”, which she devised with Darlene Johnson, transferred from Stratford to the Young Vic. The cast included an early appearance by Rik Mayall. This success was followed by “Desperately Yours” which Ruby wrote and starred in alongside Juliet Stevenson and which she later took to New York, with director Alan Rickman, where it became an off-Broadway hit.

Upon leaving the RSC, Ruby found success as a scriptwriter for “Not The Nine O’Clock News”, a talent she exported to Los Angeles where she wrote a sit-com pilot for CBS and sketches for Cheech & Chong and a Steve Martin TV special.

Returning to Britain she linked up with French & Saunders to start work on the first series of “Girls On Top”. Ruby wrote and performed her one-woman show entitled “Wax Acts” which was originally presented at the Edinburgh Festival, toured throughout the UK and completed a West End run at the Globe Theatre.

Ruby has also presented some very unusual documentaries including “Miami Memoirs”, “East Meets Wax”, “Class Of ‘69” and “Ruby’s Health Quest”. She also wrote and starred in five series of her own show for BBC TV entitled “The Full Wax”.

“Ruby Wax Meets…”, written and presented by Ruby in her own unique and inimitable style confronted Imelda Marcos, irritated Donald Trump and been intimate with Pamela Anderson. She is one of the few television personalities who has cracked Cannes and Hollywood. Her TV shows got under the skin of celebrity and looked at the wackier side of life.

She completed an MSc in Psychotherapy and a course in Neuroscience at UCL, and now runs management workshops for business leaders enabling them to find a deeper and more direct level of communication with their clients and colleagues.

Her keynote speeches and workshops combine humour with scientific and theoretical learning and practical exercises. In a very short space of time, leaders can come to a deeper and more direct level of communication with clients and colleagues. This kind of communication ensures that the individuals that make up an organisation work from a place of trust and transparency. Ruby demonstrates how leaders can get the best out of their teams making them more effective and participants leave with a set of tools helping them create a climate of positivity so directly impacting their organisation. 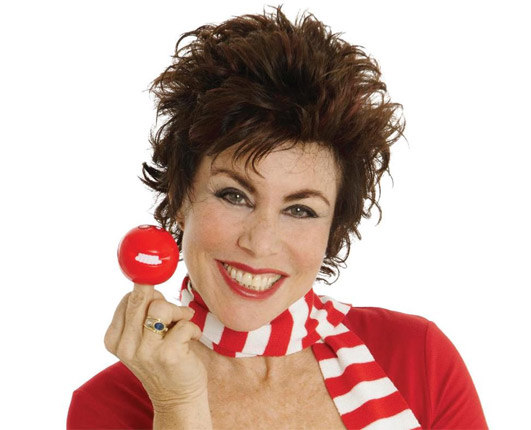 “Ruby Wax is widely known for the quickness of her wit and humour, but in addition she has extraordinary intellectual ability and is very astute about human behaviour and psychological functioning. Her intelligence is breathtaking; she is guaranteed to leave the listener with something to be treasured.”

“Thank you so much for your wonderful speech at the OXPIP lunch. I have received so many calls and messages from guests saying how you brought the subject of attachment “alive” in such an entertaining way. You have an amazing talent and all of us at Oxpip are immensely grateful to you.”

“I think that Ruby as the leader made a huge difference to the experience, brilliant comic timing aside. She has a no-holds-barred approach to communication and a strong desire for feedback, which made the whole experience feel a lot more open and comfortable.”