Catherine Destivelle is probably the greatest female climber in the world today. Her desire to conquer the most challenging mountain faces illustrates her self-belief and determination, driving her to attain her full potential.

Several films have been made about Catherine and she has published three successful books about climbing. A truly inspirational speaker who never stops challenging herself or nature, overcoming her fear every time she sets foot on the mountain.

Catherine’s daring accomplishments as a solo climber in scaling the most difficult and dangerous peaks without the use of safety ropes, support or back-up is legendary. Her passion and desire to conquer the most challenging mountain faces in the world is truly remarkable.

Born in Algeria in 1960, Catherine grew up in Paris. Because her father had a taste for climbing and a passion for the outdoors, she was from an early age a regular visitor at the forest of Fontainebleau, close to Paris known for its wilderness and bouldering delights. She began climbing at the age of 13. By the age of 15, she was picked up every Sunday by a group of more experienced climbers and whisked off to Fontainebleau for the day. By the age of 16, she had climbed the Couzy-Desmaison route on the Olan and the Devies-Gervasutti route on the Ailefroide, followed the year after by an ascent of the American Direct on the Petit Dru.

After taking a five-year break from climbing to further her career in physiotherapy, Catherine entered her first competition in 1985 and became a professional climber. In 1988, she climbed the still-new 13c route called Chouca at Buoux, France, a radically steep line of one-finger and two-finger pockets that had become the symbol of the sport-climbing revolution. It was then the hardest route in the world ever climbed by a woman. For three consecutive years she won at Bardonecchia, Italy, but after competing in the second Snowbird Cup in 1989 she retired from competitions to focus on mountaineering. In 1990 she free-climbed the intimidating Trango Tower in Pakistan. The following year she opened a new route up the famous west face of the Drus, in the Mont Blanc mountain range in just 11 days. In March 1992, she conquered the 3,970 metres of the north face of the Eiger in just 17 hours, alone and unsupported. This was a truly remarkable achievement as the first woman to attempt this extremely dangerous climb regarded as the most fatal in the Alps. Her triumph firmly establishing her as one of the greatest climbers in the world, removing any unanswered questions about female “inferiority” in climbing.

During the same year, she attempted the huge Latok in Pakistan. In 1993, she achieved the winter solo of the North Face of the Grandes Jorasses, and attempted the West Pillar of the Makalu in Nepal. In 1994, she soloed in winter the Bonatti route on the North Face of the Matterhorn. In 1995 she climbed the South West Face of Shishapangma in Tibet, and attempted the South Face of Annapurna. The year 1996 was a break in her activity, because of an accident in Antarctica, but she recovered very quickly. In early summer 1999, Catherine climbed the Direct North Face of Cima Grande di Lavaredo in the Italian Dolomites. Catherine was again the first woman for this solo ascent, which took her 2 days. 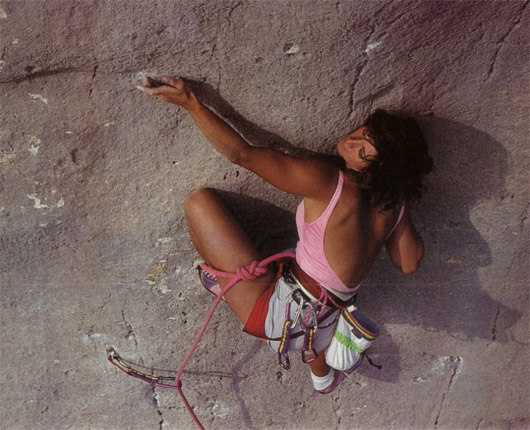