Author, entrepreneur and influential thinker and speaker about business, technology, new and social media and in particular the defense of privacy in the social media age.

Andrew Keen published his first book in 2007 Cult of the Amateur: How the Internet Is Killing Our Culture and is widely regarded as the leading contemporary critic of the Internet. The New York Times acclaimed it to be “shrewdly argued” and written “with acuity and passion.”

The book went on to be short-listed for the 2008 Higham’s Business Technology Book of the Year Award, and is now translated into sixteen languages. The San Francisco Chronicle wrote that “every good movement needs a contrarian. Web 2.0 has Andrew Keen”.

In the mid 90s, Andrew was a member of the pioneering generation of Silicon Valley visionaries who first “got” the Internet. He founded Audiocafe.com and established it as one of the most highly trafficked websites of the late 90s and as CEO became a Silicon Valley celebrity. He spoke regularly on the digital media circuit and was featured and quoted in many newspapers and magazines including Esquire, The Industry Standard, Business Week, Wired, the Wall Street Journal and The London Guardian.

In 2000, Andrew produced MB5: The Festival for New Media Visionaries, a futurist show featuring some of Silicon Valley’s leading pundits. Since then, he has held senior management positions at a number of venture capital backed start-ups including Pulse, Santa Cruz Networks and Pure Depth. Andrew is currently the Founder and Chief Executive of afterTV LLC, a firm that helps marketers optimise their brand desirability in the post-TV consumer landscape.

Andrew’s book “Digital Vertigo” which is a defence of privacy in the social media age was published in 2012. It’s a critique of networks like Facebook, LinkedIn and Twitter whose rapidly growing businesses are premised on us revealing more and more about ourselves on the Internet. He arguethat rather than uniting us, this social media revolution is making us lonelier, more isolated and more unequal. But rather than blaming technology, Andrew looks at deeper contemporary cultural and economic forces which, he explains, are the real reason why privacy is under threat and why we are all being swept into the social media revolution. His most recent book “How to Fix the Future” was published at the beginning of 2018.

Andrew currently maintains a column for the UK’s Daily Telegraph, as well as for the leading Dutch paper Volkskrant on U.S. based technology and innovation. He has written for many other publications including The Los Angeles Times, The Wall Street Journal, The London Guardian, Forbes, The Weekly Standard, Prospect, Fast Company and Entertainment Weekly. He has appeared on many television and radio shows including the Colbert Report, the McNeil-Lehrer Newsnight Show, the Today Show, Fox News, CNN International, NPR’s Weekend Edition, and BBC Newsnight. 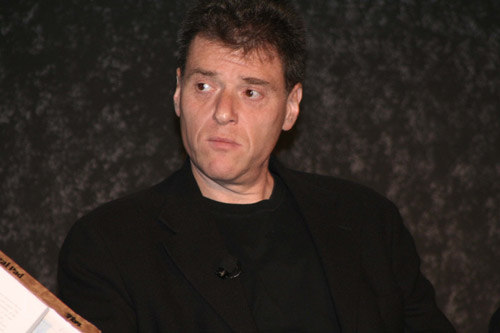 What people say about Andrew Keen

“Andrew Keen is not only one of the world’s most influential thinkers about the social and economic impact of digital technology, but he’s also one of its most articulate and passionate public speakers. His speeches at DLD have always been delightfully smart, humorous and provocative and we look forward to collaborating with him again in the future”.

“Andrew Keen is one of the most fascinating speakers I had during my 7 year tenure as master curator of Innotribe at Sibos. I have seen him perform at other prime events like Techonomy and The Drucker Forum.  As a true contrarian, he debunks myths and beliefs about the Internet and technology hypes, challenges conventional thinking, and brings back the  conversation to universal values of humanity. His delivery is passionate, deeply researched, and illustrated with poignant visuals and metaphors. His stage energy is contagious.”