Robert Swan, OBE is a polar explorer, environmental leader and the first person ever to have walked to the North and South poles. He is an exceptionally gifted communicator and is regarded as one of the world’s top motivational speakers.

In 1992, on completion of the walks to both poles, Robert Swan was charged by world leaders at the first ‘World Summit for Sustainable Development’, held in Rio de Janeiro, to undertake a ten year global and local environmental mission involving industry, business and young people.

Upon the successful completion of the missions, Swan reported back to world leaders at the second World Summit in 2002, held in Johannesburg. Here he committed to a further ten-year mission to inspire youth to become sustainable leaders and promote the use of renewable energy for a sustainable future.

Swan’s unique insights and lessons learned have enabled him to educate and stimulate young people and business leaders all around the world. He compares his icy experiences to boardroom maneuvers and his inspirational addresses on leadership and teamwork have received acclaim from discerning audiences worldwide.

His contribution to both education and the environment have been recognized through his appointment as UN Goodwill Ambassador for Youth, a visiting Professor of the School of the Environment at Leeds University and in 1994 he became Special Envoy to the Director General of UNESCO. He was awarded an OBE (Order of the British Empire) in 1995.

During 2003 Robert and his company, 2041, delivered the first corporate Antarctic Expeditions on teamwork and leadership through positive participation and real missions. Over five years, the ‘Inspire Antarctic Expeditions’ (IAE) teams have helped design and build the world’s first education station (The E-Base) in Antarctica.

His experiences from the past 25 years have evolved into an exceptional and dramatic story of success, failure, the ability to learn from one’s mistakes and ultimately, inspiring others to pursue their dreams. Some of those achievements include; leading a team of successful business executives to Antarctica to focus on leadership training; environmental clean-up and education initiatives – successfully removed and recycled over 1500 tonnes of waste from the Antarctic Peninsula, an undertaking that took five years to plan, fund and execute; led One Step Beyond Expedition to the Antarctica and brought together 35 young explorers from 25 nations to raise international awareness of environmental threats to the region; to raise international awareness on aids in Africa, “2041,” and led the ‘Earthship Mission Possible’ overland expedition 12,000 km across South Africa. Robert has just completed a five-year global ‘Voyage for Cleaner Energy’ aboard his renewable energy sailboat which finished in Singapore in 2011. Its aim was to showcase sustainable living practices and transport alternatives that run solely on renewable energy.

Robert has an extraordinary ability to thrill, uplift and inspire from his experiences and his inspirational addresses have received the acclaim of discerning audiences worldwide. 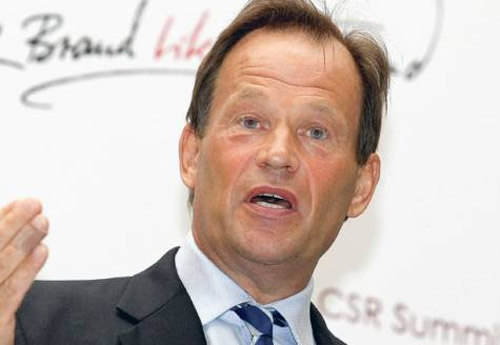 What people say about Robert Swan

“As the founder of the Kellogg Innovation Network (KIN) at the Kellogg School of Management, I’ve seen hundreds of speakers at events worldwide. In all of my travels, I have not seen or worked with a speaker with more authenticity, energy and ethical power than Robert Swan. I’ve hired Robert twice for our global corporate clients, and Robert has graciously provided his magic for our University on a number of occasions. If you’re looking for depth and insight followed by a standing ovation, hire Robert Swan.”

“If you have a heartbeat, you will be inspired by Robert Swan. Whether talking to C-suite executives or rising stars, Swan is uniquely poised to inspire people to stretch their ideas about what is possible— then to dig deep to achieve the extraordinary. He doesn’t just change people’s ideas: he changes their lives.”

“Shell staff have participated in 2041 expeditions since 2009 and we have been pleased to have Robert Swan visit us as a speaker on more than one occasion. He and the 2041 team offer a unique proposition for business; real world awareness, advice and guidance blended with pragmatism and a strong sense of environmental stewardship.”