Garry Kasparov is a former world chess champion who is considered to be one of the greatest players in history. A forceful, compelling and knowledgeable speaker whose subject matter ranges from Strategy, Tactics and Logical thinking to Politics. A regular speaker for large multi-national corporations and financial institutions who customizes his speeches to include local facts and items of interest.

Garry Kasparov has been the highest-rated chess player in the world for over twenty years and is widely considered the greatest chess player that ever lived. He held the title from 1985 to 2000 and was ranked No. 1 in the world from 1986 through his retirement in 2005. After retiring, he became active in Russian politics and briefly attempted to run for president.

Mr. Kasparov was born on April 13, 1963 in Baku, Azerbaijan, which was then part of the Soviet Union. His talent for chess was recognized early on and he was tutored for a time by Mikhail Botvinnik, the former world champion. Mr. Kasparov won the World Junior Championship in 1980, when he was 17, and soon after qualified for the world championship cycle.

He emerged as the challenger to Anatoly Karpov, the Russian world champion, in 1984. The match had many ups and downs and a very controversial finish. In a match that would be decided by whomever won six games first, Mr. Kasparov quickly fell behind. He fought back, however, and a long series of draws followed. After five months and 48 games the match was stopped by the president of the World Chess Federation. The termination was controversial as both players stated that they preferred the match to continue, but a new match was scheduled for 1985. This time, Mr. Kasparov won. He defended the title against Mr. Karpov in another match in 1986, and again in 1987. He defeated him once again in 1990.

Though the chess world was split, most people recognized Mr. Kasparov as the legitimate champion. In 1995, he successfully defended his title against Viswanathan Anand of India in a match held at the top of the World Trade Center in Lower Manhattan.

In 1996 “Deep Blue” versus Garry Kasparov became worldwide headline news. He played six games against the IBM supercomputer “Deep Blue”. Kasparov won the match 4–2, losing one game, drawing in two and winning three. A rematch was played in 1997 – this time Deep Blue won 3½–2½. Kasparov has always been at the cutting-edge of research and the battles between humans and computers from as far back as 1989.

As a master of strategy, today he applies the insights and unique perspective from his extraordinary chess career to the issues of leadership, logical thinking, strategy, and success on the speakers circuit and Russian politics. Known as an extremely intuitive chess player, Kasparov also emphasizes intuition’s role in achieving one’s full potential as an individual and achieving superior performance as the leader of a group or organization.

Mr. Kasparov is the founder and inspiration behind the Kasparov Chess Foundation, whose mission is to introduce chess into the educational system worldwide. Time magazine selected him as one of the 100 most influential people in the world in 2007. His IQ is reported to be 190, among the highest on earth. He has written a number of chess books, notably a well-regarded series called, “My Great Predecessors.” Over 100,000 hardcover copies of the series in several languages have been sold – a record for chess. In 2008 his first mainstream book “How Life Imitates Chess” was published.

Kasparov remains the highest-rated player in the history of chess and the only icon in a game of over 100 million players. His global reach is fed by a steady stream of keynote speaking engagements around the world. His speech topics vary from country to country, but he is never far from what he knows best – strategy and logical thinking. He takes his listeners into the world of calculus, deep thought, the analytical mind, and what constitutes intelligence without reducing the answer to plain black and white. 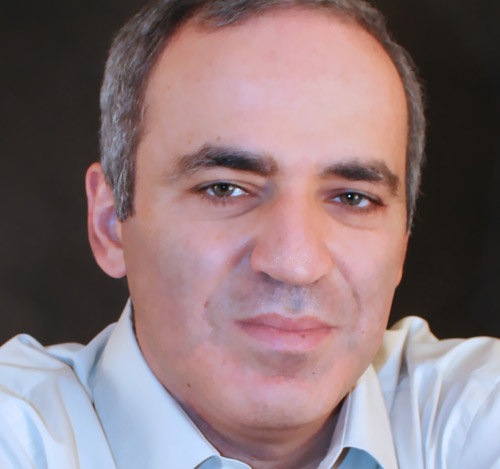