During his career Carl Lewis attended four Olympic games, earning himself international respect and a place in history as one of the truly great athletes of all time.

Lewis is a retired American track and field athlete who won 10 Olympic medals (9 gold), 10 World Championships (8 gold) in a career that spanned from 1979 when he first achieved a world ranking to 1996 when he last won an Olympic title and subsequently retired. He was a dominant sprinter and long jumper who topped the world rankings in the 100m, 200m and long jump events frequently.

He was named Athlete of the Year by Track and Field News in 1982, 1983 and 1984, and set world records in the 100 m, 4 x 100 m and 4 x 200 m relays. He still holds the current indoor world record in the long jump (since 1984). His 65 consecutive victories in the long jump achieved over a span of 10 years is one of the sport’s longest undefeated streaks. As a measure of his competitive accomplishments, his only two losses in the Olympics and World Championships prior to 1993 were to a world record (long jump in 1991) and a low-altitude world best (200 m in 1988). He has earned himself international respect and a place in history as one of the truly great athletes of all time.

His lifetime accomplishments have led to numerous accolades, including being voted “Sportsman of the Century” by the International Olympic Committee and being named “Olympian of the Century” by the American sports magazine Sports Illustrated. He also helped transform track and field from its nominal amateur status to its current professional status, thus enabling athletes to have more lucrative and longer-lasting careers.

Since his retirement from active competition in 1997, Carl Lewis has devoted a great deal of his time and energy to charity, founding “The Carl Lewis Foundation,” which serves as an umbrella for the many charities that Lewis supports including the “Best Buddies” organization, The Wendy Marx Foundation (for organ donor awareness) and many youth fitness groups.

An activist for family, youth, education, wellness and fitness, Carl uses his international celebrity status to attract awareness for the challenges and opportunities surrounding these issues around the world. 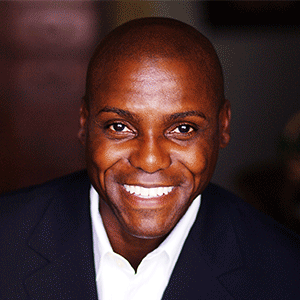 What people say about Carl Lewis

“Carl Lewis was received very well; the attendees were very excited to have him at the conference.”