Greatly admired for his personal integrity, charisma, leadership and outstanding oratory qualities, he is one of the most requested political speakers across the globe.

Joschka Fischer was both German Foreign Secretary and Vice Chancellor from 1998 until 2005 and leading political figure and expert in current affairs and crisis management.

Joschka Fischer was elected to the German Bundestag in 1983 and held one of the first Green Party seats in the governing body. In 1985 he became the Minister for the Environment and Energy in Hesse, becoming the first Green Party politician to hold government office. Upon this appointment he was the first German Green to assume a government post. From 1987 to 1991, Fischer served in various capacities in the Hessian State Assembly. He was Hessian Minister for the Environment, Energy and Federal Affairs from 1991 – 1994. In 1994 Fischer entered federal politics and became co-chairman of the Greens Party’s federal parliamentary faction. Fischer belonged to the realist camp of the party and personified a maverick form of European left politics – at once principled, pragmatic, pro-American and strongly pro-EU.

Joschka Fischer has been one of the most influential leaders of the German Green Party. Having moved the Green Party to the political centre, he formed a coalition with Gerhard Schröder’s Social Democrats in 1998 federal election. Chancellor Schröder named Fischer as Foreign Minister and Vice-Chancellor to the cabinet. As foreign minister, he stood against German popular opinion and faced down the majority of Green Party members who opposed German military participation in the Kosovo campaign, arguing against pacifism in the face of genocide and ethnic cleansing. But, as the Iraq war loomed, he clashed memorably with US defense secretary Donald Rumsfeld, and positioned himself as the one of the few outspoken critics of the Iraq invasion of 2003.

During his seven-year tenure as Foreign Minister he was arguably the most popular politician in his nation and one of the most influential leaders of the German Green Party. Under Fischer’s leadership, the green party expanded its voice in the coalition in the 2002 federal election achieving its best voting result to date.

From September 2006 until 2007, Joschka Fischer was a senior fellow at the Liechtenstein Institute on Self-Determination and a visiting professor at Woodrow Wilson School of Public and International Affairs, both at Princeton University. He has also spoken at other American universities on various topic in foreign affairs and international relations.  In 2007, he founded the Joschka Fischer Consulting company. He is a founding member and board co-chair of the European Council on Foreign Relations.

Since 2008, Fischer has been employed with the Albright Group, a Washington DC consulting firm led by Madeleine Albright   He currently runs an advisory firm in Berlin that serves a wide range of corporations and institutions. Additionally he acts as political advisor to the energy companies RWE and OMV in conjunction with the proposed Nabucco gas pipeline project. He serves on the Board of Trustees of the International Crisis Group and as Co-Chair of the Executive Board of the European Council on Foreign Relations.

Joschka Fischer has been recognized with many honors and awards, including honorary doctorates from the Universities of Haifa and Tel Aviv. In 2004, he received the Gottlieb Duttweiler Prize and in 2005 the Leo Baeck Prize for his efforts in the Middle East conflict as a mediator between Palestinians and Israelis.

He is the author of several books and his political commentaries are published widely.

One of Germany’s longest serving Foreign Ministers, Fischer looks at the challenges and opportunities facing Europe. In addition to his familiarity with foreign and security policy issues, he is an internationally respected commentator on the classical green portfolio issues of energy and climate. Able to make presentations in several languages, he explores the EU’s impact on transatlantic relations, business and social issues and enlightens audiences with personal motivational anecdotes about applying diplomacy and championing leadership, negotiation and organizational renewal. 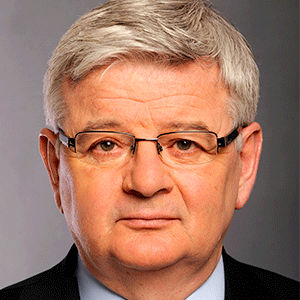 What people say about Joschka Fischer

“Joschka was very impressive, with great knowledge. He gave an excellent performance with extremely good content.”