The most exciting and personable businessman alive and the man behind one of the world’s most recognized and respected brands, Virgin. The brand has expanded into air and rail travel, hospitality and leisure, telecommunications, health and wellness, and clean energy through more than 300 companies in 30 countries.

Sir Richard Branson was born in 1950 and educated at Stowe School. It was here that he began to set up Student Magazine when he was just 16. By 17 he’d also set up Student Advisory Centre, which was a charity to help young people.

In 1970 he founded Virgin as a mail order record retailer, and not long after he opened a record shop in Oxford Street, London. During 1972 a recording studio was built in Oxfordshire, and the first Virgin artist, Mike Oldfield, recorded “Tubular Bells” which was released in 1973. This album went on to sell over 5 million copies! Since then many household names, including Belinda Carlisle, Genesis, Phil Collins, Janet Jackson and The Rolling Stones have helped to make Virgin Music one of the top six record companies in the world. The equity of Virgin Music Group – record labels, music publishing, and recording studios was sold to THORN EMI in 1992 in a US$1billion deal.

Virgin Atlantic Airways, formed in 1984, is now the second largest British long haul international airline and operates a fleet of Boeing 747 and Airbus A340. The airline is based on the concept of offering a competitive and high quality Upper Class, Premium Economy and Economy service. The airline has won many major awards, including Airline of the Year Award several times.

In 2008, the combined sales of the different Virgin holding companies exceeded £5 billion. In addition to his own business activities, Richard is a trustee of several charities including the Virgin Healthcare Foundation, a leading healthcare charity which was responsible for the launch of a health education campaign relating to AIDS in 1987.

The Foundation has also become involved in a lobbying campaign called Parents Against Tobacco, which aims to restrict tobacco advertising and sponsorship in sport. His help in the initial funding of charity projects helped that organisation to raise over £100 million, through campaigns such as Comic Relief and many other charities.

In July 2007 on his and Nelson Mandela’s birthday, Richard joined Nelson Mandela, Graça Machel, and Desmond Tutu to help announce the formation of the Elders, a group of leaders to contribute their wisdom, independent leadership and integrity to tackle some of the world’s toughest problems.

Richard is also putting significant focus into Virgin Unite, the independent arm of the Virgin Group that focused on entrepreneurial approaches to social and environmental issues. He is supporting a number of efforts with on the ground partners ranging from the creation of sustainable health clinics in Africa to the fostering of new entrepreneurs through the Branson School of Entrepreneurship in South Africa. He is also setting up a “War Room” in Africa to help coordinate all the different health efforts, look at and advise on best practices, and monitor and alert the world to new diseases.

Richard Branson has been involved in a number of world record-breaking attempts since 1985. In 1986 his boat, “Virgin Atlantic Challenger II” rekindled the spirit of the Blue Riband by crossing the Atlantic Ocean in the fastest ever recorded time. This was followed a year later by the epic hot air balloon crossing of the same ocean in “Virgin Atlantic Flyer”. This was not only the first hot-air balloon to cross the Atlantic, but was the largest ever flown at 2.3 million cubic feet capacity, reaching speeds in excess of 130 miles per hour (209 km/h).

In January 1991 Richard crossed the Pacific Ocean from Japan to Arctic Canada, the furthest distance of 6,700 miles. Again, he broke all existing records, with speeds of up to 245 miles -per hour in a balloon of 2.6 million cubic fee

Since 2010 Richard has been making the move up into space (tourism). Virgin Galactic’s Philippe Starck-designed, The first Burt Rutan-engineered spacecraft, The Enterprise, completed its first captive carry and is slated to start carrying passengers into the thermosphere in 2012, at $200,000 a ticket.

His latest venture in 2011 along with American sailor, pilot and explorer Chris Welsh, and submarine designer Graham Hawkes has been the launch of Virgin Oceanic, a project to explore “the last frontiers of our own Blue Planet: the very bottom of our seas.” The project includes a partnership with Google. Using their mapping technology, Google hopes to chronicle the dives as they happen and share discoveries, footage and record breaking achievements with the world.

Branson also has a philanthropic streak. He’s pledged the next 10 years of profits from his transportation empire (an amount expected to reach $3 billion) to the development of renewable alternatives to carbon fuels. And then there’s his Virgin Earth Challenge, which offers a $25 million prize to the first person to come up with an economically viable solution to the greenhouse gas problem.

Sir Richard is the author of several books including “Losing My Virginity: How I Survived, Had Fun, and Made a Fortune Doing Business My Way,” “Business Stripped Bare: Adventures of a Global Entrepreneur,” and “Reach for the Skies: Ballooning, Birdmen, and Blasting into Space.” He is ranked among the 10 best businessmen of England, has a net worth of $4 billion, and is close friends with The Rolling Stones all while running a huge company. 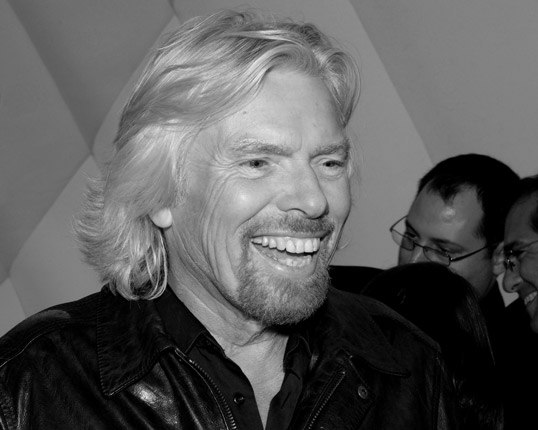 “Branson seems hell-bent on making sure everybody is having as much fun as he is. Branson a self-described “adventure-capitalist”, is a business creation engine whose business instincts are matched by an ability to motivate people that work for him. And who wouldn’t want to?”