The World’s Greatest Living Explorer who has led more than twenty expeditions to the remotest regions of the world. He has climbed Mt. Everest, ran 7 marathons in 7 days on 7 continents and was the first man to cross both the polar ice-caps. A true legend and inspirational figure of our time, he is a highly sought after speaker.

Sir Ranulph Fiennes was born in 1944 and brought up in South Africa. He was educated at Eton and served with the Royal Scots Greys for a time before joining the SAS where he became the youngest captain in the British Army. In 1968 he joined the Army of the Sultan of Oman and in 1970 was awarded the Sultan’s Bravery Medal. In the same year he married his wife, Virginia and together they embarked on a series of record-breaking expeditions. She became the first woman to be awarded the Polar Medal in 1987. She passed away in 2004.

As far back as 1968 Ranulph was showing his intrepid spirit. He led the first hovercraft expedition up the longest river in the world (the Nile). In 1984 he was described as the “World’s Greatest Living Explorer” by the Guinness Book of Expedition and that was before he climbed Everest, Eiger and ran 7 marathons. He was the first to circumnavigate the world along its polar axis (with Charles Burton). ‘This 3 year, 52,000 mile odyssey took intricate planning, 1,900 sponsors, a 52 person team to handle, complex communications, meticulous planning and iron determination mixed with flexibility. The circumnavigation has never been successfully repeated.’

In 1990 he achieved the world record for unsupported northerly polar travel and in 1992 he led the team that discovered the lost city of Ubar on the Yemeni border (after seven previous search expeditions over a 26 year period). Also in 1992 he completed the first unsupported crossing of the Antarctic continent. This was the longest unsupported polar journey in history. In 2003, only 3½ months after a massive heart attack, 3-day coma and double bypass, Ranulph Fiennes achieved the first 7x7x7 (Seven marathons in seven consecutive days on all seven continents). In May 2009 he became the oldest Briton to ever summit Mt. Everest. This was after 2 failed attempts in 2005 and 2008 when he came within 400m of reaching the summit. In 2007 he climbed the North Face of Eiger.

To date he has raised a total of more than £14.6 million for various charities.

He is the author of 18 books including The Feather Men, (a UK No 1 Best Seller and which in 2011 was released as a major motion picture called Killer Elite), Beyond the Limits, Captain Scott, the best-selling biography of 2003 and his autobiography, Mad, bad and Dangerous to Know (2007). His latest book My Heroes was published in 2011 and describes the extraordinary and often horrific events that led to ordinary individuals becoming Sir Ranulph’s great heroes.

Sir Ranulph has been awarded an honorary degree from Loughborough University, the University of Central England in Birmingham and the University of Portsmouth; and in 1997 The Royal Institute of Navigation awarded Sir Ranulph Honorary Membership. In 1993 he was awarded an OBE for ‘human endeavor and charitable services’. In 2000 The Explorers Club, British Chapter, honoured Sir Ranulph with the Polar Exploration Millennium Award. In 2007 he was winner of ITV Greatest Britons Sports Award.

Although known the world over as an explorer, Sir Ranulph Fiennes entertains and inspires audiences where his presentations draw parallels with the difficult day-to-day challenges that we all face. He speaks about the importance of teamwork, patience, discipline, creative thinking and determination. A truly remarkable and enthralling speaker. 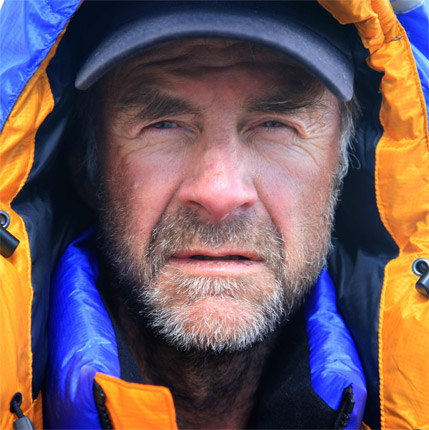 “Sir Ran was absolutely inspiring, witty and engaging with the most amazing stories. We’ve had nothing but extremely positive feedback….in all he’s the best speaker I’ve ever heard so do pass on our thanks”.

“Your session was inspirational and a highlight for many of our attendees.  We were thrilled you were able to be part of the programme.  I hope to work with you again in the future”.

“I cannot recommend Ran Fiennes highly enough to anyone looking for a speaker. Not only is his subject matter interesting and entertaining, but his delivery is fabulous. And he is, of course, a delight to work with.  Ran spoke for 50 minutes, plus Q&A, and was a great hit with the audience.  And he spent time afterwards signing lots and lots of books – before his long drive home”