The ultimate competitor, a natural communicator with a dynamic but informal style, Pete never ceases to amuse, entertain and inform with his presentations.

Pete Goss is a sailor, adventurer and former Royal Marine, who has had numerous seafaring adventures and is perhaps best known for his heroic rescue in horrendous conditions of a fellow competitor in the 1996/7 Vendee Globe round the world race.

With a wide variety of adventures under his belt, Pete Goss talks positively and with passion about leading teams through exciting, but often complex, difficult and dangerous situations. Pete has worked on a diverse set of projects that are able to sit together through a common thread of Innovation, Technology, Challenge and Adventure.

In the summer of 2011 Pete took an intrepid adventure to the Arctic Circle pushing himself, his team and their equipment to the limit. They traveled in two 6-metre, Suzuki-powered RIBS (Rigid Inflatable Boats) over the course of six days. It was the first time the route had been battled in such small RIBS and the team took on the challenge to prove the capability of the modern day RIB. These two RIBS are now being used by the charity Sea Shepherd, which defends wildlife and habitats of the world’s ocean creatures.

In 2010 Pete sailed solo with an entry in the historic ‘Route du Rhum’ ocean race; a grueling 3,500 mile single-handed race across the Atlantic coming in a very respectable 14th – “not bad for an old dog”.

In 2008 Pete built and raced the high tech open 40 ‘Spirit of Mystery’ to recreate and celebrate the heroic journey of seven Cornishmen who sailed a 37ft wooden lugger to Australia more than 150 years ago.

One of the largest projects for Pete was when he gathered together the team and sponsors that enabled the construction of the world-famous giant catamaran ‘Team Philips’ in 2000. This was a five-year project that was attempting a world record. It was brought to grief during Atlantic trials by a freak storm with waves of such velocity that they halted the progress of the 120ft boat resulting in the sad loss of the boat, but thankfully not the crew. At the height of the Team Philips project, Pete headed-up a workforce of more than 100 employees, brokered multi-million pound sponsorship deals and assisted in the creation of several new companies in fields as diverse as new media, engineering, education and boat-building. Handling these complex and often conflicting pressures whilst all the while being under the media spotlight, gave Pete a unique insight into the challenges that face every organisation.

Equally at home battling the elements alone or leading a business team from the front, Pete draws from these experiences to offer management talks, team-building exercises and training sessions that will not only challenge individuals and groups, but inspire them to achieve beyond what they thought possible. His presentations explain that all his projects must fulfill three strict criteria. They must involve challenge, innovation and a significant element of technology coupled together with the hunger to win.

Pete is the author of the best-selling book about his yachting adventures – ‘Close to the Wind’, where Pete shares his adventures, thoughts, hardships and philosophy during and throughout the ten years of preparation for the 1996 Vendee Globe. He also lectures in business schools and is an Associate Fellow of Said Business School Oxford University.

In recognition of his heroism and outstanding seamanship, Pete has been awarded the Legion d’Honneur and an MBE.

He lives in Cornwall with his wife and three children. 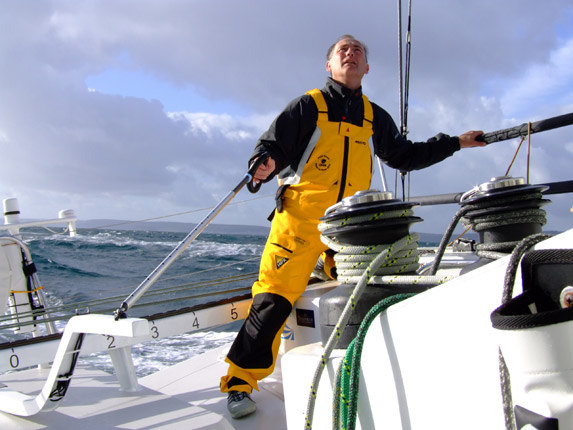 “Pete was simply one of the most inspirational speakers we’ve ever had, and his messages about the importance of teamwork and innovation were very relevant for our business. He’s a great storyteller, and an incredibly humble and likeable guy. The feedback from our event was overwhelmingly positive about him and his message, so I’d strongly recommend him.”

“The talk is still being discussed in corridors and over lunch both internally and with clients…a most enjoyable, stimulating and inspiring evening.”

“Pete’s presentation was absolutely first class, mixed with a sense of life experiences, challenges and real business issues that he has overcome during his obviously challenging career.”