Having served on the Ben & Jerry’s’ corporate board for almost 40 years, providing in house legal counsel, top level management, and fostering many of the company’s social initiatives. He became affectionately known as the Ampersand (&).

Jeff’s current role is B.O.D Emeritus, a role he is happy to do alongside being President of the Ben & Jerry’s Foundation. Jeff resides in Ithaca where he is the president of Social Ventures, as well as a co- founder of the Community Dispute Resolution Center and a community micro-finance program.

In addition, Jeff has also served on the local school board, working to eliminate race and socio-economic status as a predictor of student success, and is an advisor to the Dorothy Cotton Institute, Alliance of Families For Justice, and the Economic Hardship Reporting Project. Alongside his other commitments Jeff is on the Board of the Oakland Institute and currently he is developing a voting project to increase voting participation.

Jeff has spoken in South and Central America, Europe, and across the United States on the power of business to impact social change. 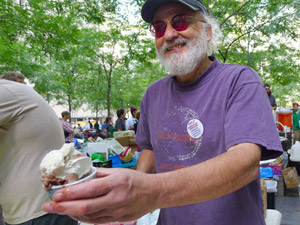