A trendwatcher and futurologist who has written five books in English (translated in 40 countries) and has advised entrepreneurs, multinational corporations and governments about their future orientation and future scenarios. An inspiring visionary and entertaining speaker.

Bakas is known as exciting, stimulating, humorous, visionary, entertaining and therefore much sought-after expert and speaker at conferences and other gatherings. In the Netherlands he was voted “Black Entrepreneur of the Year” in 2008 and “Trendwatcher of the Year” 2009 and “Most Influential Trendwatcher 2010” by the Dutch Marketers’ association. He has sold more than 500,000 books worldwide and was one of the first commentators to predict the current economic crisis – and the path to recovery.

He combines knowledge with entertainment and thus delivers ‘infotainment’, garnering a great deal of publicity in influential media at home and abroad. According to the press he is ‘renowned’ (Volkskrant), ‘inspiring’ (NRC Handelsblad), ‘stimulating’ (Elsevier), ‘ahead of his time’ (Story), ‘optimistic’ (CNN), ‘provocative’ (TV2 Magazine Denmark) and ‘he makes you smile’ (BBC).

With roots in three continents he is in fact at home everywhere. He is widely traveled and erudite and combines expertise and knowledge with a big dose of humour. He runs his own consultancy – Trendoffice Bakas – and uses his own research and that of various other Dutch and foreign partners and parties. Previously he worked in radio and was the director of the trend communication bureau Dexter bv. He studied Dutch (specialised in Communication Theory) at Utrecht (1983-1987) and has acted as a guest lecturer at various universities and colleges in the Netherlands and abroad.

Bakas is furthermore among other things a member of the Supervisory Board of the COA (Central Agency for Welcoming Asylum-seekers), the Recreation Foundation (the knowledge centre for the Recreation industry) and the Jury for the Care Innovation Prize 2008. He is a columnist for a number of professional journals, and is one of the most popular speakers on the Dutch lecture circuit with 250 lectures every year. He is a passionate art collector and loves to travel and read. 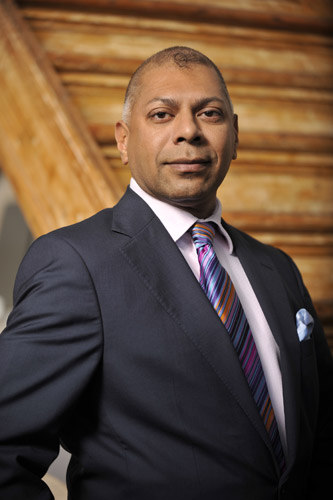 What people say about Adjiedj Bakas

“Adjiedj Bakas gave a wonderful and inspiring speech at the opening of our conference about the future of boat, during our annual Fair BOOT Düsseldorf 2014. Our audience was really delighted!”

“Adjiedj Bakas opened our annual conference with a speech about trends in leisure and sustainability. It was even better than what I imagined! The perfect start for a good conference.”